BOTD has had quite a busy fall so far with successful October dates in Indianapolis and Columbus. They are now gearing up for the next installment of Alehorn of Power in two weeks with the mighty THOR headlining! Details with set times are listed below and tickets are only $20 to witness this barrage of heavy rock! BOTD will also return to the studio in December to continue working on its new album while recording a new track to be released as a 7″ with Albuquerque’s own LEECHES OF LORE. Look for it late spring next year along with some very special road dates in the Summer of 2017. Stay tuned! 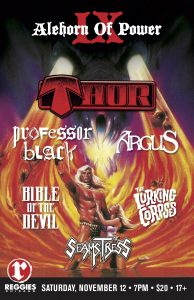